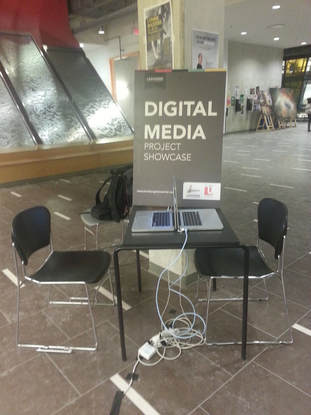 2014 // full title: Orwell and Huxley Are in a Double Bind Because Morton Only Has One Fork

Orwell and Huxley's Double Bind is a interactive installation created for FACS 2936 Designing Interactive Objects I. The piece consists of two laptops, called Orwell and Huxley, that can communicate with each over via a text-based messenger application developed in MaxMSP. Pairs of users are encourage to sit down and chat with each other. Unbeknownst to them, the messenger application behaves differently on the two laptops. On Orwell, messages containing sensitive words cannot be added to the chat log. On Huxley, headlines retrieved from that day's tabloids are periodically spam the chat log thereby hiding the conversation.

Orwell and Huxley's Double Bind serves as an exploration into censorship. The work postulates the idea that even those living in democratic countries can find themselves blinded to the truth. In the piece, Orwell is represents a totalitarian state that directly conceals information from the user. Conversely, Huxley is a democratic state that indirectly censors the user. They differ in their methods of censorship, but the outcome is the same. The ignorance of the users of the differences in the messengers reflects the ignorance that modern day users have about the media they consume.